Hello and welcome to all Great Dealers out there!

We have a huge announcement for you: Dealer’s Life joined Itch Holiday Sale and it’s now on sale at 40% off for less than $5! This is the lowest price ever! 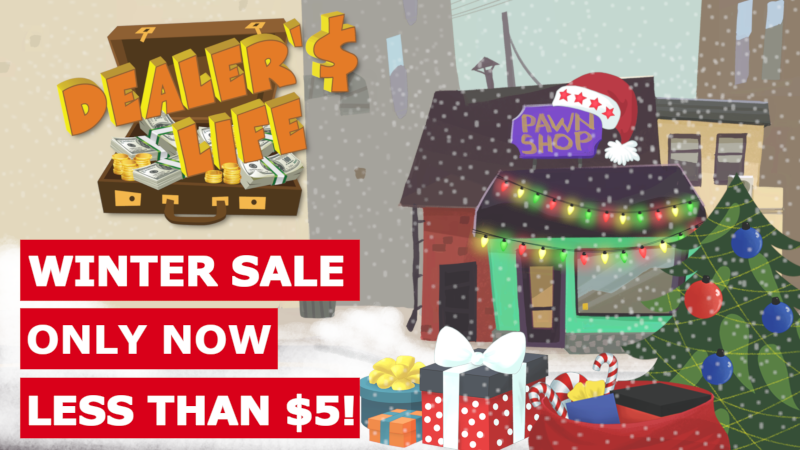 Also, the in-game Winter event is live on all platforms: your shop is sparkling with lights and decorations, look for some special items that are available only during the event! And if you find them, be sure to share them!

Dealer’s Life now includes more than 520 items with tons of new content updates, all released for FREE in these months!

The new 1.22 “Games and Legends” update is currently in Beta, more info here: https://trello.com/c/54N4d6p1/518-version-122-read-me
It includes 25 brand new items for a new total of more than 540 items! If everything goes well in Beta, it will be released after the Winter event in early January!

As time goes by, we feel that we have worked a lot on the game: we started working on Dealer’s Life more than three years ago, the first internal Beta release for Android was exactly three years ago and the official release on Android was in February 2017. We spent *really* a lot of time and energy on our creation, polishing and improving it with nearly 20 free updates, till we were confident that it was solid enough to be released on PC.

That’s why we decided to avoid Early Access on PC and immediately go for a full release last January: we knew we would definitely keep updating Dealer’s Life (one thing over all… Storage Auctions! Released last June with the 1.18 update) but we also knew that it was a solid game with more than two years of development behind it.

Now we feel that, after another year of development and a total of nearly 30 free content updates since the first Android release, this is even more true.
So, starting from early January, we will increase a bit Dealer’s Life price on all platforms (PC and mobile) to include all these months of work and all these free updates.

This is also something that will not affect at all any player that has already bought the game, in a similar way the Early Access does (low price at the beginning, higher price later), which we think is very important as we always want to be as fair as possible, especially with all the players that have already supported us!

So, don’t miss the chance to live the ultimate pawn shop experience!
Be sure to grab your copy before the offer ends because it’s the lowest price you’ll see for a long time!